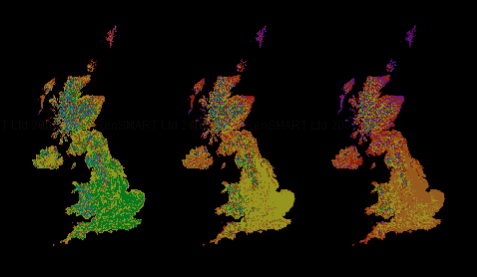 The NOABL Wind Speed Database is the result of an air flow model that estimates the effect of topography on wind speed.

There is no allowance for the effect of local thermally driven winds such as sea breezes or mountain/valley breezes.

The model was applied with 1km square resolution and takes no account of topography on a small scale or local surface roughness (such as tall crops, stone walls or trees), both of which may have a considerable effect on the wind speed.

The data can only be used as a guide and should be followed by on-site measurements for a proper assessment.

Originally commisioned by BERR in 1996 and generated at the Hadley Center, the data used to calculate the estimates was collected between 1975 and 1985.

Although the original source has been taken down, there is an archived version here with academic paper references: http://webarchive.nationalarchives.gov.uk/20090609065721/http://www.berr.gov.uk/whatwedo/energy/sources/renewables/explained/wind/windspeed-database/page27708.html

We published our NOABL lookup service using this data overlayed onto a map in 2008.

An error has occurred.

I understand. Do not show this again. ×